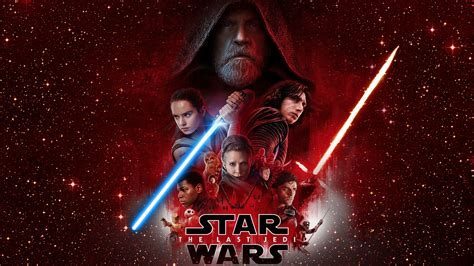 “The war is just beginning…..and I will not be the Last Jedi.”

Luke Skywalker. If you watch a lot of Star Wars movies, you know who Luke is. The quick witted, Jedi Master is back. In this sequel trilogy by Lucasfilm, Luke Skywalker has vanished, but in Star Wars: The Force Awakens, the Resistance found him. A young woman by the name of Rey has discovered that she has force abilities and has gone to get Luke Skywalker to come and restore peace to the galaxy. But Luke has a different opinion: “I’m not coming back…”

In the meantime the First Order is chasing the last of the resistance who hope that they can keep the spark they have and gain the freedom that they want.

This movie portrays a good lesson “don’t give up.” In this movie, the Resistance keeps striving for freedom never giving up. It shows the will of sacrifice for other friends, even to the point of death, which happens to many in this movie. Luke Skywalker in the end apologizes to  his failed Padawan and tries to make things right, but the failed Padawan resists.

There are a lot of sacrifices in this movie. This ends up with many people dying. There is a little blood on some people’s heads, but that is all when it comes to blood. One person gets a lightsaber ignited through his gut, and then his body falls to the floor.

Their is a little bit of language in this movie. There also is the “force” which Luke refers to as a religion that may not agree with some people. Other than that and a couple of intense fighting scenes, that pretty much covers the scary parts of this movie. One other problem with this movie is that there is a scene in which some of our heroes are at a casino. In the casino we see a bunch of gamblers that are gambling. One of the heroes says  “This place is the best” and is distracted by a bunch of ladies.

Thanks to http://youtube.com for the video!