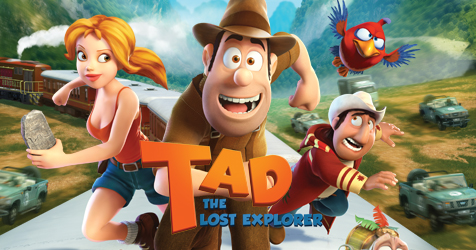 “You never find anything…”

Tad is a normal construction worker that wants to be an archaeologist. But one  day all of that changes, when he has to take the place of a professor that can’t make a flight, he embarks on a incredible journey to find a lost city. He visits some crazy places and makes amazing discoveries. But little does he know that there are others that want to find the city for its riches.

In this movie we learn that the bad guys never win. The bad guys always seem to have the upper hand, but in the end, they have to deal with the consequences. Tad sacrifices himself to save others. He also cares about others, not just archeology like other people in this movie do. Tad also is very enthusiastic as a kid, he never gives up, not even when people try to put him down. He is an orphan, so his grandma raises him, and we see him always talking about his dad, and doesn’t look to it as a punishment like most orphans do.

This movie is based on finding a lost city that has mummies that are still alive, these people are still alive because ” of and idol that mother nature created.” This is pure nonsense. The mummy, a silly little guy, looks a little scary. Also, a man says that he doesn’t want to go into the tunnel and says, “come on bird, let’s play poker.” Later we see this man gambling with a bird.

There are some issues with language in this movie. There is an unfinished “oh my…..,” and the Lord’s name is misused once. There is a little more language throughout the movie. Also Tad and a man keep calling each other in anger “Toad” and “Moron,” this is clearly unacceptable.

This is an Indiana Jones type of movie. Its adventurous, daring and very thrilling. Constantly the villains are catching up with our heroes, but the heroes seem to always make and escape. Do they eventually find the lost city, or is this all just a legend? Do Tad and his gang beat the bad guys to it, or will the bad guys find the city first? To find out, click on the link below and get the movie to see what happens in Tad: The Lost Explorer: