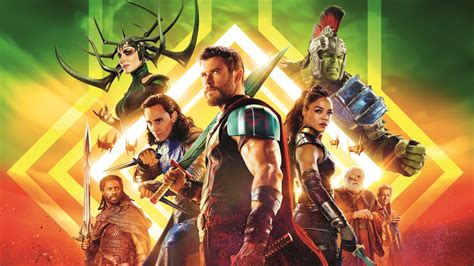 “I lost my hammer like yesterday, and then went on a journey of self discovery, where I met you…”

Thor is back! After Thor: The Dark World, Loki was presumed dead by Thor and Thor moved on in life. He went looking for Infinity Stones, only to find none. Then he gets trapped by a villain to know that Asgard is in serious danger. What is coming, a monster? No, a prophecy called Ragnarok is beginning to unfold. And it all starts with the reappearance of Thor’s older sister, Hela, the goddess of death.

When Thor is taken into custody, he tries to get back as fast as possible to help Asgard, he doesn’t stay where he is safe. Throughout the entire movie, he is trying to help his people, like a good prince should. In his fight with the Hulk, he says that he doesn’t want to hurt him, which shows good friendship. Near the end, one character knows that he has been doing something wrong, and changes his ways to do right. This is a really funny movie, with jokes coming along every once and a while.

This movie does have a lot of violence in it. Some of the violence is bloody, while sometimes it isn’t. Hela uses the eternal flame to raise an army of skeletons to be her army. Hela also is seen frequently attacking people by shooting knives through them. Thor is tased a lot in this movie as well as a few other people. We also see a fire demon as well as the head to an animal slide across a room with green blood.

Valkyrie is seen drinking a lot in this movie, one time she falls over, the rest of the times is just to see how fast she can drink. Thor says to Valkyrie that he “likes woman a little too much.” We also see Thor shirtless in one scene. Hulk is naked after coming out of the hot tub, but we only see his butt for a few seconds. Then he puts on a towel.

There is a bunch of language in this movie. The Lord’s name is misused twice, then there are a few others that are a little out of some people’s comfort zones. A portal that leads to Asgard is marked as being named the “devil’s anus.”

So are you excited to see what will happen to Thor in this new movie. Who is going to win the fight, Thor or Hulk? Will Thor stop Ragnarok before it happens? Is Loki on the good side? Who is Valkyrie? What does the Grandmaster want with Thor? Find out all the answers to these questions in the exciting and funny Thor: Ragnarok. You can buy it below: