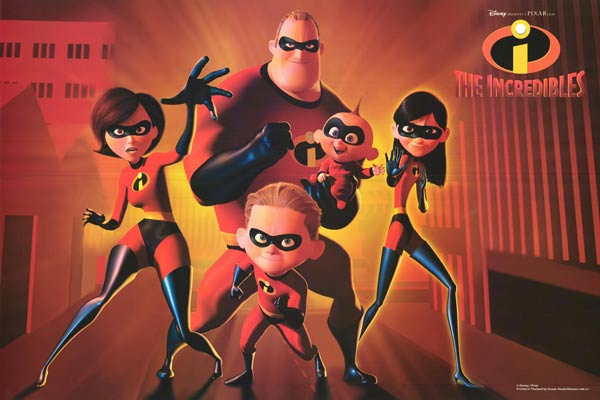 “We’re superheroes, what could happen?”

A lot can happen. The Parr family is made up of a bunch of heroes that have to try to fit in with the crowd. Not only is this hard for the kids who have to act normal in school, but it is also very hard for Bob Parr, their father. Bob wants to go back to the days in which he could fight crime as Mr. Incredible, but he doesn’t notice that things aren’t the way things were then. But when a unknown person calls Bob to do some hero work, he jumps to it, not knowing what will happen.

This movie has some good lessons. First of all, the family is in a jam in this movie, but fighting bad guys actually helps them unite better. By the end of the movie, they are actually functioning as a family. They also learn that they have to work together in able to do things right.

Bob also learns in this movie that everything isn’t about him. He instead learns to put his family in front of his own wants. Bob also apologizes for his previous actions. He, along with the entire family change the way they act.

As I said above, the family is really out of order in this movie. The parents are constantly fighting. Bob lies to his wife. Also the kids fight a lot in the movie. They all learn to work together eventually near the end of the movie.

There is a little violence in this movie. Machines blow up and people are shot at. One person attempts suicide by jumping of a building. Only in one scene is there blood on Mr. Incredibles arm. Also , one person turns into a devil looking thing. Enda Mode also says that she used to design for gods.

There is a little language in this movie. Enda Mode exclaims “my g-d” twice. Also there is a few uses of h–k. Also, Mrs. Incredible holds her backside and shakes her head.

The Incredibles are a great superhero show for kids to watch. They have amazing powers, and are always fighting to protect others. That being said, there are a few things that you want to watch out for, but overall, I think this movie has a great lesson and is very entertaining.  Will the family stop Syndrome? Why is he attacking the world? I hope that you will click on one of the links below to watch The Incredibles with your family.