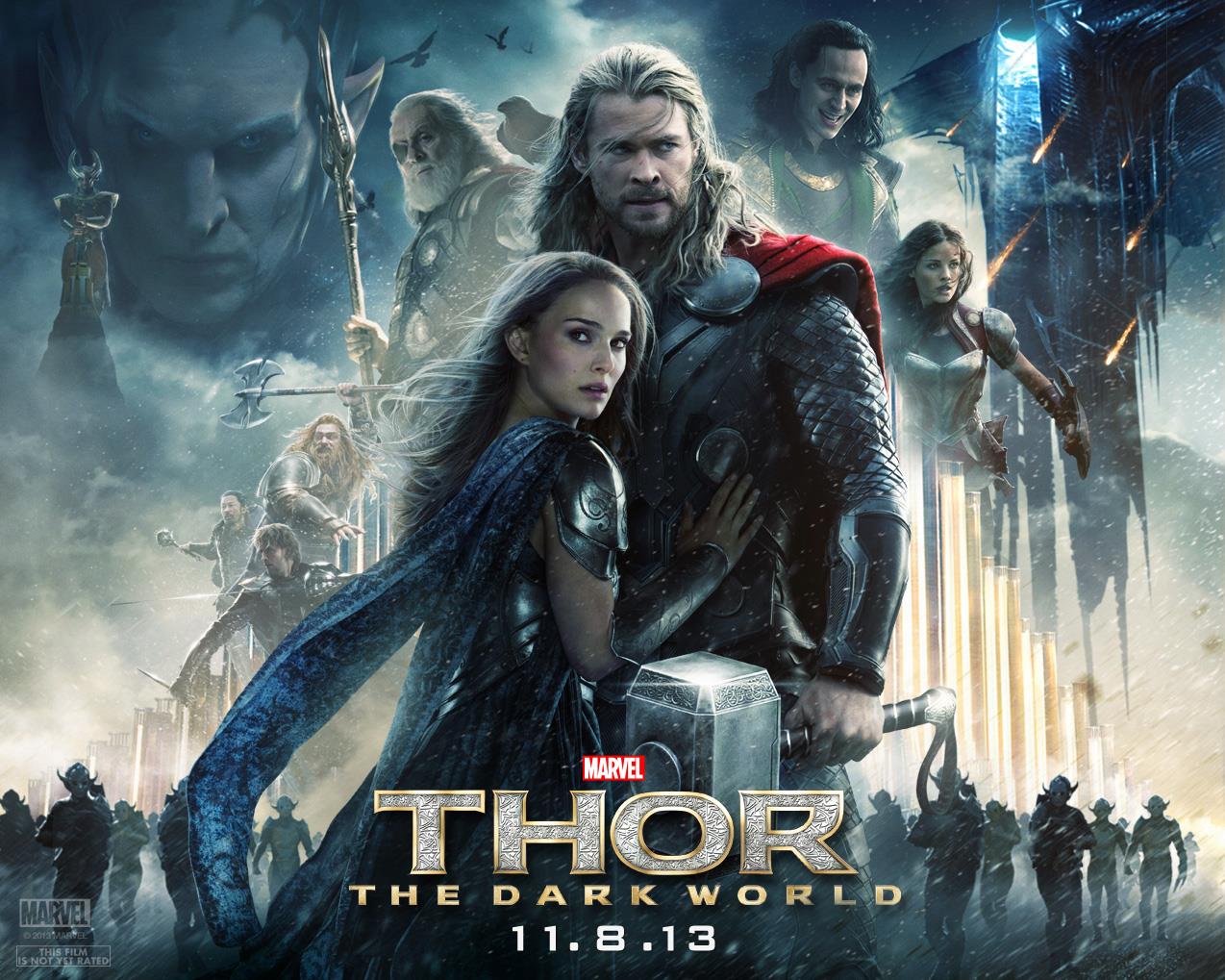 “The Dark Elves are no more…”

Or so Odin thinks. When Jane Foster finds the mysterious Aether, Malekith awakens right at the time of the convergence. The convergence is when the 9 realms all line up. If Malekith gets the Aether and uses it during the convergence, he can turn all the world’s dark. Thor is busy undoing Loki’s mess when he hears that Jane Foster touched the Aether and that the Aether has inhabited her. When he hears of this, Thor immediately goes to protect her from Malekith. Thor learns that he won’t be able to stop Malekith alone, so he recruits some of his old friends, including Loki, even after his attack on earth in Avengers. Can this group of heroes (and villains) save the 9 realms from doom?

Thor, as we all know, is an Avenger. He is also the heir to Odin’s throne. As a prince, he cares for his people by helping them bring peace to the nine realms. In order to do that, he has to undo all of his brother’s, Loki’s, messes. Also, Thor protects his girlfriend and others who are endangered when the Dark Elves attack. Thor does like to battle though, and he deliberately disobeys his father’s orders. Loki sacrifices his life for Thor, or so we think. Also, Thor’s mother sacrifices her life for Jane’s.

The Elves were very violent. They kill people by choking them and then the victims face turns to a stone color. We also see two people get stabbed and other people get killed and many explosions are seen.

Thor is a god as is Loki and Odin. They all have their specific power over something. Loki calls himself a god and Odin surprisingly replies, “We are not gods, we are just like men, we age and we die.” Loki replies, “it may take a couple thousand years.” Then Loki is taken away to pay for his crimes. There also is treason against Odin.

Thor has a girlfriend on earth named Jane Foster, as we said above, who is in trouble. Thor goes to protect her, like a good friend. They share a couple kisses though. We also see Jane dating another guy who says he dated a woman who left him and just started sleeping with other men. We also see a woman accidently put her hand on Thor’s chest, and she says “sorry,” and turns away. Eric is seen naked in one scene, but his privates are fuzzed out by the broadcasting service. We also see Eric in his underwear and he says that it helps him think. When they have to go stop Malekith, he says, “I better get my pants.” Thor is also seen shirtless in one scene.

This movie doesn’t have a lot of language in it. We hear 2 h-ly sh– from Darcy. We also hear 2 Lord’s name and 2 h-ll.(one of which we hear when  Loki says to a monster, “See you in h-ll.”)There is a little other language but not much more than that. We do see some drinking in this movie, but only for some brief seconds. Also we hear a woman say to Thor “Come and drink with me.”

Thor deals with a lot of problems in this movie. He has to undo Loki’s disasters, protect his girlfriend, and hopefully destroy the Dark Elves. Now, he may be strong, but he has never fought anything like this. While he does this, we see Thor try to do what he can to protect Asgard and Midgard (earth) from the Dark Elves. While he could have tried to get permission from Odin, he thought he knew better. Now that isn’t a good attitude, but Odin is pretty stubborn, so it might have been to late for Thor to save Jane Foster, the situation is a tricky one. I also like the fact that there isn’t a lot of language, which you rarely see in a Marvel movie. If you would like to see Thor starring his second movie versus the Dark Elves, click on one of the links below to buy it: