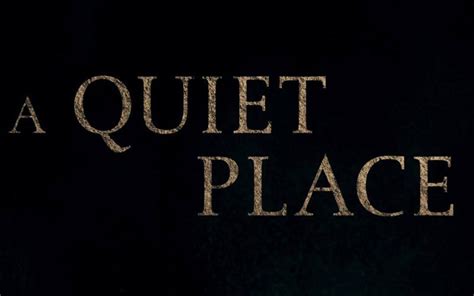 Aliens have invaded earth, but these aren’t like the Chitauri in Avengers and they aren’t like E.T.. These monsters are hunters. The good thing is, these monsters are blind. But the bad news is that they can hear sounds very well, forcing people to be quiet if they want to live. This movie focuses on the Abbott family, a family who has survived for a little over a year since the aliens landed. They have to place sand where they walk and use sign language to talk to each other. Even when they are doing school they can’t make a sound or when they are playing Monopoly. While the family struggles to survive, Evelyn is getting ready to have a baby, and how can you do that while being completely silent?

A Quiet Place is mostly quiet, so all of the words (minus a couple scenes) are in captions with the people using sign language. This being said, it is one of the quietest movies ever made. Since there isn’t a lot of talking, there isn’t any of bad language. At the table, they hold hands and bow there heads before a meal, indicating that they are praying.

Most of the Ripe Apples are on the dad. The dad loves his daughter even after she is the one who got his son killed in the beginning of the movie. The dad tells Evelyn he will protect the kids. When a monster is about to kill the kids, the dad screams, getting the monsters attention and getting himself killed for his family.

Being a horror movie, that already secures that 12-year-olds and under should not watch this movie. This movie has many violent scenes, as I will talk about in the sections below.

These monsters look creepy, they look kind of like Venom. The monsters don’t hesitate to kill. We see raccoons killed as well as a few people. In one scene we see a woman whose chest was ripped open with blood coming out. The husband is by her side, and gets very angry and screams. The monster comes fast and kills the old man (though we don’t see a lot.)

We see tons of blood all throughout the movie. Evelyn is expecting, and when she goes to have the baby, when she goes to have the baby, she gets in the bathtub and then she begins to bleed between her legs, but we don’t see anything. Evelyn steps on a nail that is on the stairs, and we see her do it. We also see her lift her foot up and bleed as the nail is removed. She limps around and then we don’t see it again.

Honestly, I expected this movie to be a little bit more scary, but it is only PG-13, so I guess it can’t be that scary. If you are an adult or teenager who likes horror movies, than this is a good movie for you. If you don’t like scary images, then I wouldn’t suggest this movie. Horror movies are going to be scary, and you should know what kind of movie you are walking into before you do. That being said, it is an interesting movie. If you would like to buy or rent it, click on one of the two links below.