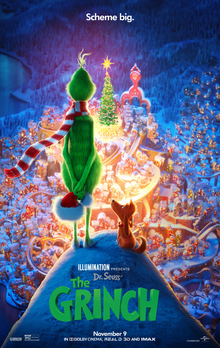 Christmas Eve is once again dawning over the sweet, happy little town called “Whoville”. The choirs are caroling, the kids are building snowman, the chefs are making delicious cakes, roasts, and puddings. Everything the same as last year, so to think. What the people of the village of who don’t realize is that the Grinch has finally had enough. Since the mayor of Whoville demands Christmas to be three times bigger this year, the unhappy Grinch plots his evil scheme that he hopes will stop the Whos from singing, laughing, and eating. He plans to steal CHRISTMAS.
In this movie we learn that the Grinch isn’t a Christmas hater. He just is tired of being alone after 51 years of solitude, whether from the orphanage or his mountain cave. The only companion he has is his loyal dog, Max. Together they both go on an epic journey to find some reindeer, find out how many houses are in Whoville via doggy drone, and more! The Grinch doesn’t think that it is fair that he has to be alone by himself, so he eventually steals every house so called “Christmas” except for one house.

This house was Cindy Loo Who’s. He learns as he rides away with all of their presents, lights, and cakes, that Christmas is about each other’s companionship. Though this story doesn’t quite teach the REAL meaning of Christmas, the Who’s do sing a few Christian songs such as “God rest ye merry gentlemen”, and more! There was no profanity besides the mild exclamations such as “What the h-ck” and “geez”. The Grinch steals a sled from someone’s roof as well. There is also a certain child whose clothes fly right off him while his friends try to make a trap for Santa. Nothing is shown thanks to an ultra-mega huge chocolate chip cookie.
For this movie I will give the thumbs up for any little that wants to watch it! Check it out for yourself while it’s still in theaters!

See all posts by johnnyappleseed072