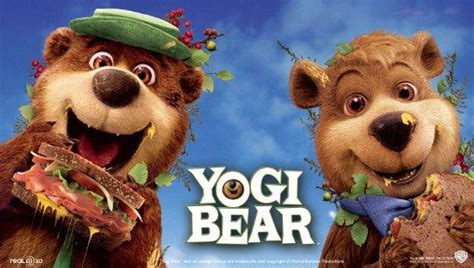 Yogi Bear is smarter than the average bear. To start, he can talk, he is also can stand on his hind legs. He also is the best picnic basket stealer in Jellystone Park. He is glad with how life is going for him. Yogi thinks that nothing could change his life. This is true till Jellystone isn’t making enough money, so it may be closed. It is up to Yogi, Boo Boo, and Mr. Ranger to save their park. Can they do it?

There is very little wrong with this movie. We see a little bit of dancing in which Yogi shakes his butt. When talking about temperature, Yogi tries to kiss Mr. Ranger. Then he replies, it is better than the way they take my temperature. There also is a talk about how Boo Boo has a lot of gas after eating baked beans.

When Mr. Ranger is interested in a girl, Yogi notices and says that he should follow her around and then urinate on her. This may not be picked up by some children, but it is easy for adults. The girl and Mr. Ranger kiss at the end of the movie.

Yogi Bear is a great movie for the entire family! It has some jokes that will make you laugh and giggle. If you watched the Yogi Bear cartoons, this is just like that, except in real life. I hope you decide to watch this movie. Will Yogi steal any more picnic baskets?