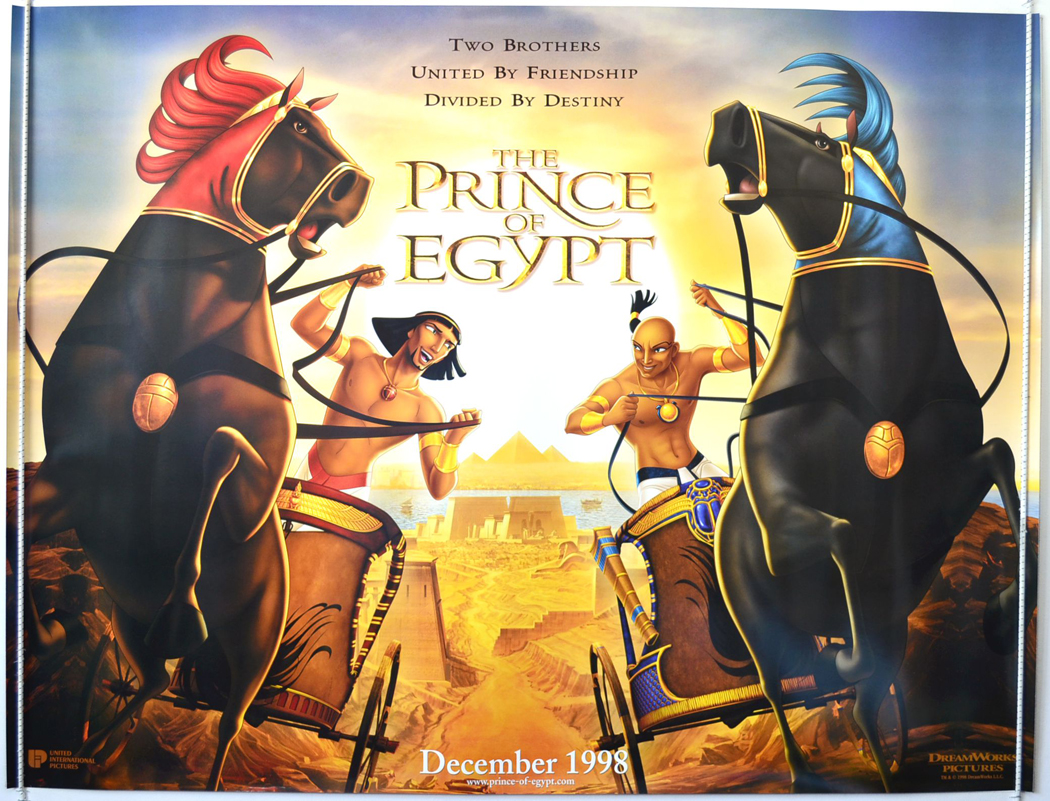 There is barely anything wrong with this movie. We see one person’s underwear. There is no language. A few slaves get beaten. A few people die of plagues.

I am going to review this movie in its entirety, so expect spoilers.

Moses is a lucky Hebrew. In Egypt, where he was born, all of the little babies were supposed to be killed. Instead, he was hid and then found favor with the queen, who made him a Prince of Egypt. His second mother never told him the truth. Instead he went on living as a prince, while of his family were in slavery. The story would end there if God didn’t have a plan for Moses.

One day, his brother gets more responsibility, and he does as well. He also gets a wife. He goes to meet her, but she runs away. As he chases her, he meets his real siblings. Moses doesn’t believe them when they say that he is their brother. He quickly runs away. However, he knows that they are his family, making him not a Prince of Egypt. Disturbed and confused, he doesn’t know what to do.

Moses’ entire life is messed up now. He has always thought of himself as a prince of Egypt, but now he knows he really isn’t and now, he feels terrible that his people are in slavery.

One day, his brother decides to build a new temple, and he shows Moses the plans. As Moses looks them over, he sees an old slave being beaten and he takes action. He pushes the beater off the ledge to save the slave. He kills the man on accident. Quickly, he knows what will happen if his father found out he did that, so he ran away.

When he finally got to Midian, he met his supposed to be wife again. He is welcomed to their family after he saves the children. He even gets married to the woman.

One day, while watching the sheep, one runs away. He follows it, and it leads him to a burning bush. In the bush is God. God tells Moses to go and save his people from slavery. He quickly rushes home and prepares. He and his wife set off for Egypt.

When he gets to Egypt, he learns that his brother is Pharaoh. Moses is quickly welcomed back. Moses is disturbed that he has to tell his brother news he will hate. When Moses does tell him, his brother refuses his command and shews him away. Moses shows him that God is with him by turning his staff into a snake. This is regarded as easy, since the magicians can do the same thing. But God isn’t done with Egypt.

As Moses warned, plagues began to come. From storms to darkness to bugs, the Egyptians are plagued. But every time, Pharaoh just hardens his heart. Eventually, all of the firstborns of Egypt die. This drove Pharaoh over the roof. He said that the Israelites could go.

With a heavy heart, he leaves his brother’s presence, and begins the journey with God’s people for the Promised Land. It looks like it will be smooth sailing from here. However, this is wrong, because now Pharaoh wants his slaves back. He quickly rushes after them. He has them trapped, but then, Moses parts a sea, then the Israelites get away. When they are finally across, God lets the Egyptians in, and they all drown.

In the end, Moses keeps on bringing the Israelites to the Promised Land. He continues on this task for the rest of his life. The movie ends with them still on the journey. For the end of the story, read Exodus, Joshua and Leviticus. These are books from which this story is taken from.

I think that this movie is a great portrayal of the story of Moses. I highly recommenced it for any family. It is educational and very thrilling. I hope you check it out.