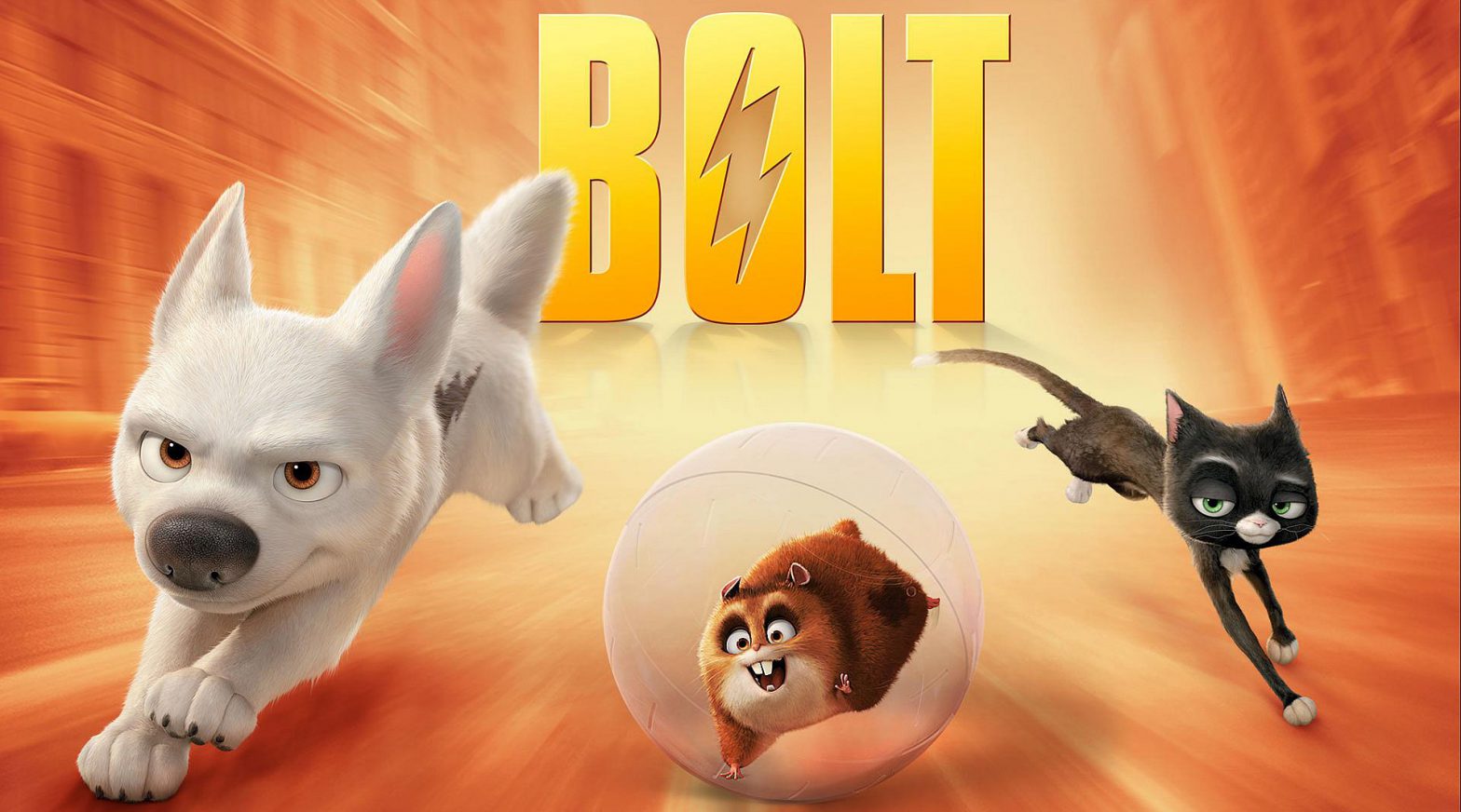 This movie is very kid-friendly. There is very little language or inappropriate content. There is a bit of violence, but it is all cartoon. There is nothing in this movie that should offend you or your kids, so I am going to write an in-depth review, so expect spoilers ahead.

The movie starts off with Bolt and Penny, the two stars in the story. Bolt is a super dog with some amazing powers. His job is to protect Penny, his owner. He needs to protect her from the green-eyed man. The green-eyed man wants to take Penny, but Bolt won’t let that happen. In the beginning of the movie, we see Bolt saving Penny, but after he finishes saving her, we learn that Penny and Bolt are just actors for a TV show.

Though this is true, Bolt really believes that he is a super dog, and they want to keep it that way. he continues to make some episodes, until one comes in which Penny is caught. He quickly goes to save her, but instead, finds his way off the studio and into a strange new world. Bolt is now lost, and he has to find Penny before the green-eyed man accomplishes his evil deeds.

When he is out on the street, his powers begin to not work. This confuses Bolt, but he believe that his powers are being drained because he has some Styrofoam stuck to him. He believes Styrofoam is his kryptonite. As he roams the street, he meets some pigeons. He asks them if they have seen a green-eyed man, or his cat. The pigeons say they know the cat, and then they bring him to a cat that threatens the pigeon’s lives named Mittens. Bolt quickly makes the cat his prisoner.

He forces Mittens to tell him where the green-eyed man is, and she has no idea what he is talking about. She quickly notices that on Bolt’s collar it says he lives in California, so she plays along and tells him he has to go to California. After telling him, she thinks she is free, but she is wrong. Instead, Bolt holds her hostage. Then they begin to take their long journey from New York to California.

As they are on their way to California, Mittens teaches Bolt how to act like a real dog. She teaches him how to fetch and even beg for food. When they are begging for food in a trailer park, they meet a hamster named Rhino who knows Bolt from the TV show. Rhino wants to come on the adventure to find Penny, so he tags along. As they travel, Mittens decides to quit, and ends up making Bolt and Mittens get taken by the Animal Control.

They are placed in cages on a truck, and Bolt thinks that this is no problem, because he can just bust them out. He is wrong, and then he finally begins to realize he is not a hero. Rhino, who was following the truck, helps Bolt escape. After Bolt is safe, he knows that he needs to save Mittens, so they go back to the Animal Control to rescue her.

After a daring rescue, Bolt and Rhino finish their journey and finally make it back to California. They quickly head for Hollywood to find Penny. Mittens finally quit on the journey, driven by selfishness.

When they finally make it to Hollywood, they learn a terrible truth. Bolt has been replaced with another dog, and Penny seems to like this new dog, and this crushes Bolt.

Though Bolt doesn’t know it yet, Penny really misses Bolt, but has to move on in order to keep the show afloat. Mittens is convicted to continue on the journey, and when she catches up with them, she sees Penny say that she misses Bolt. Mittens quickly tries to find and convince Bolt that he was wrong about Penny not caring for him anymore.

Bolt is surprised to see Mittens in California. He explains to her that Penny forgot about him, but Mittens tries to explain to him that this is not true. Bolt is very hurt, and doesn’t believe Mittens. The story would end there, but then smoke started coming out of the studio. Something had gone wrong, and it was up to Bolt to save Penny from the fire.

He heroically leaps in to go save her. When he finds her, he grabs her, but all the exits are blocked. The firemen are about to leave, until Bolt starts barking. When they hear the barking, they go back to grab Penny, and Bolt saves the day and is a real hero.

Penny was injured in the fire, and after she healed, she quit the TV show. Her mom, Bolt, Rhino, and Mittens all settle down in their own peaceful house. Finally Bolt and Penny can have the relationship they had been wanting.

The TV show continues, but without Penny, and Rhino stops watching the show, disappointed with how it turned out.