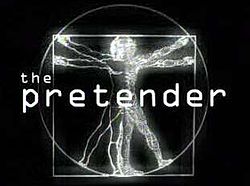 Jarod is a Pretender. Now that sentence alone may leave people in wonder. Let me explain what a pretender is. Pretenders can be whoever they want to be. They can be a firefighter one day, and the next day be a scientist. Pretenders can also figure out how things happen without knowing all the details. Jarod is one of these special people.

Unfortunately for Jarod, he was captured as a child, and he was put to work by the Centre, an organization that he didn’t even know. They used him to be able to predict certain things. Luckily, after becoming an adult, Jarod ran away.

Being free meant everything to Jarod. He felt horrible for helping in the evil of the Centre, so now he embarks on a mission to help others. As he does this, he hopes to find his parents. But hot on his trail are the Centre who want to get him back, but Jarod almost always outsmarts them…

Jarod is convicted from helping the Centre in their evil. He is determined to right his wrongs by helping others. In every episode he helps everyone he sees that needs help. Jarod is very good when it comes to this. Jarod’s character is very well developed and a good one to follow, mostly.

Sydney, Jason’s guardian at the Centre, also feels terrible about what they did to Jarod, and he constantly helps Jarod escape. Sydney even asks Jarod for his forgiveness. Jarod refuses to forgive him, for now.

There is not a lot of violence in this show. We see some blood, but not a lot. There are practically no gun shots heard, though you may see some guns pointed at people. Other times we may see people fight, but nothing too intense. Jarod isn’t much of a fighter, more of a runner, reducing the violence significantly.

Not much sexual content in seen in this television series. We see Miss Parker in a few immodest outfits. In one episode, however we do hear about Miss Parker having sex, but it is hidden very well, except for one scene in which she is seen with a man and they are both not fully dressed, though we don’t see much.

The rest of the episodes don’t have any sexual scenes or anything worth noting for this category.

We see some people drink, and sometimes we know what the drink is, and other times we don’t. We also don’t see people drunk, except once we see one person drugged and acts very drunk. We see some scenes set in a bar.

We hear the Lord’s name misused everyone and a while, but not a lot. We also hear “h-ck” and “d-m-” a few times. “H-ll” is barely ever heard. No f-words are heard. The language is very spread out throughout the show, so we only hear 2 to 3 words on average in the episodes.

Jarod want to help people, not harm them. When he sees those who were hurt, he wants to help them and make the bad guy pay. Usually he makes the bad guy pay whatever price he made the hurt family pay. Jarod, however, never kills anyone. You don’t see this in many television shows these days, unless you watch the old version MacGyver in which MacGyver refuses to use a gun. This television show, minus a couple inappropriate episodes, could be watched by tweens, teens, and adults without any worries. The lessons are mostly good and most of the content is appropriate. Let me know in the comments how you liked the TV show.