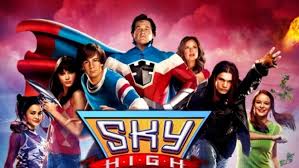 “I don’t have any powers, and I never may get any!”

Will Stronghold is the son of two very popular superheroes, The Commander and JetStream. He is very proud of his father and mother, and they want him to grow up to be better than them at stopping bad guys. Will only has one problem with living up to the legacy, however. He does not have any superpowers. Despite having no powers he still goes to a super hero school called Sky High, where he will be trained how to be a hero or a sidekick. Will, having no powers, automatically will be a sidekick. Will Will be able to get superpowers and stop the villains in disguise and save Sky High or will he be a sidekick forever?

Will wants to live up to his parents expectations, but he figures that he can’t. Will is seen breaking the rules a couple times, but he always admits to his parents that he messed up and he apologizes.

Will really messes things up with his girlfriend too. He tries to make it right, but it sometimes just turns out being worse. Both of them encourage one another in their downfalls. Will, in the end, fixes his relationship with her.

Will also fixes a relationship with a guy who is his enemy. He realizes their differences and tries to make a good relationship instead of a bad one.

Superheroes are seen taking down the bad guys and fixing everything the villains break. Many people become friends and learn that heroes and sidekicks shouldn’t be separated because all of them are super.

Not much violence is seen in this movie, despite it being a superhero movie. There is no blood seen in this movie. We seen some fire balls thrown and some people have fist fights. We also see some other fighting, but nothing too violent. a bunch of superheroes are shot with a laser that turns them into babies. This may scare some children.

There is only a couple things to note in the sexual content here. We hear Will’s mom say that she remembers when Will and his girlfriend swam naked in a kitty pool. One kid is seen getting his head dunked in a toilet, and references to that sort of thing are made frequently.

No alcohol or drug content is in this movie.

As for language we hear some namecalling. Words like “jerk” and “idiot” are heard a couple times. We hear the Lord’s name misused twice.

Will Stronghold has a lot on his plate. Trying to balance his relationships with other people and trying to save the world is not easy. However, Will does rather well in the movie and learns his lesson at the end. To the most part, this movie is good. it does however have it’s kinks, but they are very few considering other superhero movies out to this date. I hope you enjoy Sky High. Let me know what you think about the movie.