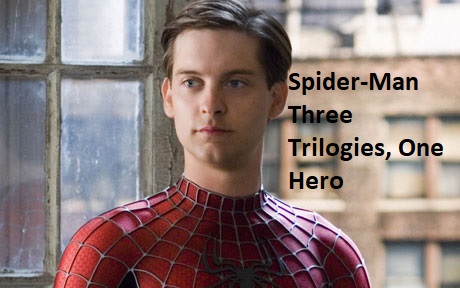 Spider-man has had multiple different trilogies made, and each one uses a different set of actors, as well as different villains. The age-old question is which trilogy is the best. In this post, I am going to briefly describe each trilogy, and then I will explain which is my favorite in the conclusion. In the comments, feel free to tell which trilogy is your favorite. Now, on to the first trilogy.

Warning! Spoilers for some of the films are found in this post.

The first live-action Spiderman was played by Tobey Maguire. The first movie in this trilogy was released in 2002 and was the origin story of Spiderman. This movie explained how Peter got his powers and why he chose to be the hero. He fought the Green Goblin in this film, and at the end of the film he had decided to give his life to fighting crime.

After Spider-man’s success, Sam Raimi directed a sequel called Spiderman 2, which was released in 2004. In the sequel, Peter Parker had to juggle both his life and his responsiblity. Peter, however, wanted to quit being a hero because it got in the way of his personal life.

However, by the end of the movie, he had learned that his great power needs to be used for good and not left untouched. In this sequel, Spiderman fights Dr. Octopus, and to some extent, his best friend Harry. Multiple people learn of Spider-man’s identity in the second film.

In 2007, the final film of the Sam Raimi trilogy was released. This film receives much critisim from critics and fans, but it is neverless part of the trilogy. In the final film, Peter Parker must battle the Sandman as well as the alien symbiote known as Venom. As he does this, however, even his own personality is affected and he must battle the evil forces to be the hero and save the day.

After the Sam Raimi Trilogy came to a close, Sony started a new trilogy and chose Andrew Garfield to play the part of Peter Parker. In the first film, The Amazing Spiderman, Peter Parker got his powers and the storyline was similar to Spider-Man (2002). The only significant difference was that Spider-Man fought the lizard instead of the Goblin.

When both these villians team up, they outmatch Spider-Man for a while. Eventually Spider-Man takes them both down, but Gwen Stacy, Peter’s girlfriend, loses her life in the process. After Gwen’s death, Peter no longer wants to be Spider-Man, but then he remembers that with great power comes great responsiblity, and the movie ends with him fighting the Rhino, not turning in the mask today.

There were rumors that an Amazing Spider-Man 3 was going to be made, but that did not happen. Instead, Peter Parker entered the Marvel Universe. This time he was played by Tom Holland. His first appearance was in Captain America: Civil War. He later returned in his own movie, Spider-Man Homecoming. In this film, Spider-Man must battle the Vulture, who had stolen some alien tech from the Chitauri. Iron Man even shows up in this film to help Spider-Man.

After Spider-Man Homecoming’s success, Spiderman: Far from Home was released in 2019. In this film, Spider-Man goes on a vacation only to find that the world needs him to step up to the plate and become the next Iron Man. They need him to battle the Elementals and whoever is behind them as well. Tom Holland also played Peter Parker in Avengers: Infinity War and in Avengers: Endgame. There is also a rumored Spider-Man 3 coming soon, but a release date has not been released yet.

One thought on “Spider-man: Three Trilogies, One Hero”