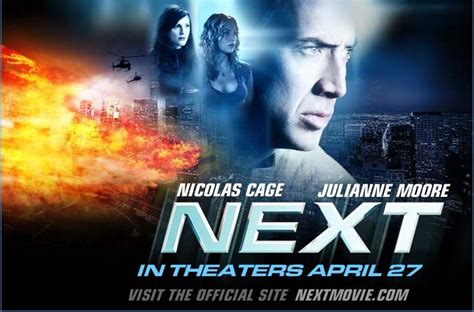 Cris Johnson is an unique individual. He has the unique power of being able to see into the future two minutes ahead of everyone else. He ca only see the future if it relates to him, however.

Except for one woman named Liz Cooper, he is able to see much farther into the future with her. As he searches for her, however, the government is trying to track down Cris Johnson so they can use his unique ability to track a nuclear bomb.

Cris Johnson doesn’t want to help the government. Instead, he wants his freedom. However, eventually he agrees to help them, with conditions.

Cris is even seen saving his enemies from their deaths. This is something you usually don’t see in thriller movies like this one. Cris doesn’t save his powers for just himself, he also uses them to help the entire world.

A few people are killed by guns in this movie. We also see many explosions and cars smashed. Many people are killed in the final battle. Two men get into a fistfight. This movie also has some blood. Liz is especially bloody near the end of the film.

We see Liz and Cris kiss passionately before a scene ends. When we come back to them, we find them in bed, and they have obviously had sex, but we do not see anything. Also, Liz gets out of the shower and is only wearing a towel. Li and some other women wear some clothing that reveals a lot of skin, but no nudity. Cris is shirtless in two scenes.

Cris is seen drinking an unspecified drink twice in the film.

This movie definitely had me guessing about what would happen next. The movie’s ending was quite unexpected. Overall, I enjoyed it, but the language and sexual content could have been less for the movie. Let me know what you think about the movie in the comments below.