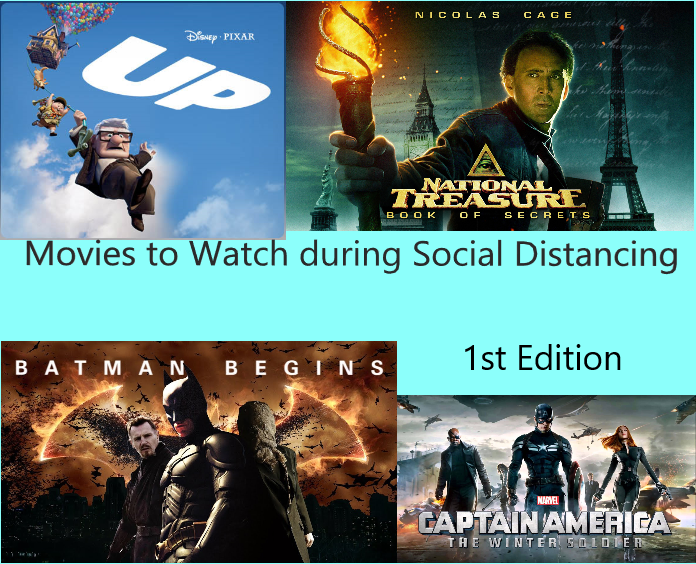 At the moment, the people of the world are trying to social distance so that you can protect yourself and others from the virus known as COVID-19. While this may be easy for some, for others of you it may be extremely hard to stay in your house. This list was designed for people to find some good movies to watch to help the time pass. Below will be a list of my suggestions and links to the movie reviews. I hope that this post helps you!

#1 – Pirates of the Caribbean: The Curse of the Black Pearl

This is the first film in the Pirates of the Caribbean series. Captain Jack Sparrow must fight a group of cursed pirates that cannot be killed. Joining Jack are William Turner and Elizabeth, the governor’s daughter. Can the lift the curse and bring an end to this cursed crew?

Join Benjamin Gates as he begins a journey to clear his great-grandfather’s name. Ben’s great-grandfather supposingly helped in the assassination of Abraham Lincoln, but Ben does not believe such a fact. Thus, with the help of Abigail and Riley, he goes to disprove this assumption. Can he do it?

Fred Randall has always dreamed of becoming an astronaut, but he never really got the chance. That is, until one of the members of the mission to Mars gets hurt. It is up to Fred to go to space and help bring back information for research. Will Fred be able to do it? This movie is great for the whole family and very funny, see the review for more information.

Skeeter is just an ordinary guy that has to babysit. But when he lets the kids tell a bedtime story at night, they become real the next day. This could be good, but it also could be really bad. A great movie for the whole family.

What if you could see two minutes into the future? What would change in your life? Cris Johnson has this ability, but it is coveted by the government when there is a threat of an atom bomb.

This is the first film in the Dark Knight Triology. Watch how Bruce Wayne goes from being a man of the past to a hero that fights the villains of Gotham City. Can he clean up the streets, or will Gotham lay in ruins?

Following Captain America: The First Avenger, Steve Rogers is back and joins S.H.I.E.L.D to protect the world. When a new villain comes around, it is up to Captain America to counter him. But this secret villain has a past with Captain America.

Mr. Fredrickson likes to be left alone. After his wife died, he just wanted to live in peace. However, that did not work out for him when he ends up fighting talking dogs and their master. Is Mr. Fredrickson up to the challenge?