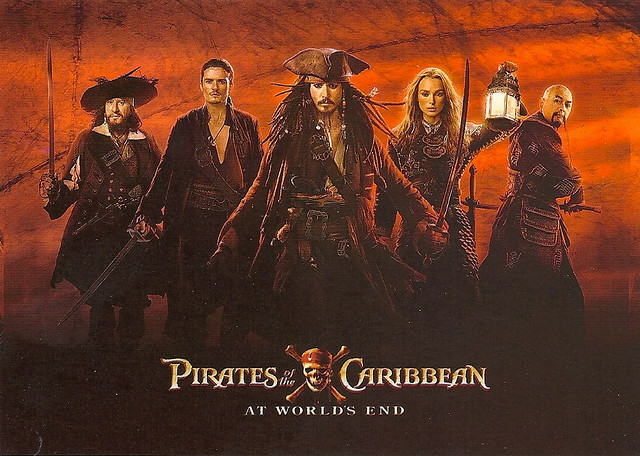 “Getting there is not the hard part. It’s getting back…”

At the end of Pirates of the Caribbean: Dead Man’s Chest, Captain Jack Sparrow was left to suffer to the might of the Kraken. However, though he had been taken into Davy Jones’ Locker, his remaining crew did not give up on rescuing him from a terrible fate. Can they bring Captain Jack, or will Davy Jones rule the seas?

Though Will Turner does look after himself sometimes, he also looks after Elizabeth and his father. Will suffers a lot in this film for his friends. We also see Jack care about someone besides himself for once. Many people sacrifice their lives for others, including main characters.

The bad guys may always seem to have the upper hand, but that does not stop the good guys from fighting with everything they’ve got.

We see a few skeletons as well as some blood. A few people get stabbed and some break bones. One person gets his head sucked off by octopus tentacles. Other people are shot, and one is shot in the head. One heart is stabbed and another is carved out of someones chest off-screen. Many people are hanged at the beginning of the film. One person’s eyeball pops out. The fish people return for this film.

Elizabeth and Will try to get married. Will is seen kissing Elizabeth’s legs and rubbing against them. In one scene Elizabeth must remove her pants, but we see nothing. People underneath her try to see something, but they are really looking at a big shirtless man.

We hear 2 bl–dy and 2 h-ll. We also hear some pirate references like “scallywag.”

This was a good addition to the series, though I do not think that they needed to include the heathen goddess. Overall, I enjoyed the film, and I look forward to the next film. What will Captain Jack Sparrow do next?