Our story begins with Michael Jennings, a very talented engineer, who visits a tech show that’s demoing a 3D image of a young woman’s face coming off of a computer screen. He buys one of these products and then walks into a clean room to begin disassembly and we watch as he builds something even better– a version that doesn’t need the monitor at all, but projects the young woman right into the air. After this, and a short tryst with the lawyer (which you only see the kiss and then a still shot of them mostly clothed/kissing), Jennings is shown getting his memory erased by a machine that can zap individual brain neurons to remove the memory. We’re told that the brain can only take so much of this “heat” before becoming a marshmallow.

Shortly after this, Michael is invited to take another job– a 3 year job– for which the details are sketchy, but the payoff is huge. After considering it, he decides to take the job, and is brought into a new lab where he begins to work on this project. The next thing you know, you’re at the end of the project, and Michael goes to collect what he expects to be a $90 million payout. Only it’s not. He’s signed over all his shares, and left himself only with an envelope full of what he considers junk.
A 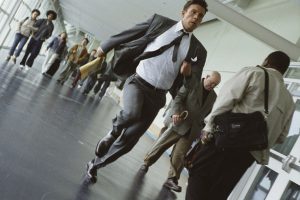 nd here’s where the movie becomes much more entertaining.
It turns out that Michael built a machine that can go into the future, and in it, he saw that the men he was working for are going to kill him to keep the machine secret. So he left himself all this “junk” to be used at the appropriate time in order to save him from being killed and to help him in his quest to destroy the machine before it destroys the world.
I won’t spoil all of the neat ways a fifty cent piece, paperclip, crossword puzzle and diamond ring end up being used, but suffice it to say you will enjoy the journey as he puts the pieces together to figure out his past– both what he knew and how to stop it.

The pacing is decent, with a good degree of action and comedy. There are a few cuss words that are used throughout, but the most suggestive it gets is the brief scene with the lawyer at the beginning that more implies that something happened than actually seeing it.
The movie avoids appearing that dated, though cell phones are flip phones and not smart phones. It does seem set in a time period in the future when you have projection televisions that can show in 3-D and even the FBI has the ability to interrogate the brain to see images that are stored in it– and companies have the ability to erase it.
If you would like to buy it, click one of the links below:
Amazon Video:

One thought on “Paycheck”