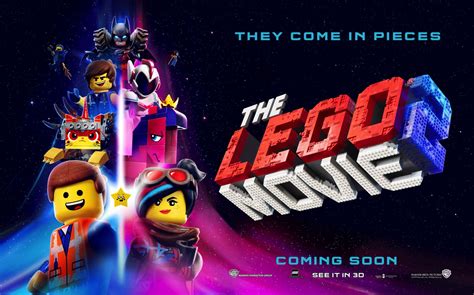 After The Lego Movie and The Lego Batman Movie, the Duplo blocks have invaded Bricksburg. They came and destroyed all of the buildings that were built up, and every time they built something nice, they would come and destroy it again. Now, they are all tougher and have built Apocapsburg. They all are trying to survive from the deadly attacks by going into hiding. Everyone has changed.

Everyone, except for Emmet. Emmet is still the lovable, little mini-figure as we all know. He hasn’t grown tough and still looks at everything positively. Everyone wishes that he would change, and when his friends are captured, it’s up to him to change. Can he be more tough or will Armageddon come and all the Legos will be put in storage?

This movie has a very good lesson that applies to many families. In it, we see a brother and sister fight in real life, and they are playing with the Legos to show it. We see them break each others stuff and be mean to each other. Their mom eventually has enough. The kids eventually learn that it is wrong to bicker and fight. They actually begin to share with each other at the end. This lesson, as I said is a great lesson that can be shown through watching this movie.

Also, a guy by the name of Rex Dangervest. He helps Emmet go find his friends and even saves his life. This shows that we should care for others when they need help.

Though the lesson in this flick is good, there are a few things worth noting. In the beginning, we see Bricksburg in ruins, and all the citizens are mean to each other.

Violent content in this movie does not get much worse than Legos being broken and a few explosions. A few lasers are seen, but none do much damage. There is no blood what so ever. The violent content is so mild, so almost any kid could stand it.

There is barely any sexual content in this movie. One thing we hear is that a vampire wears woman’s pants, when we obviously know he is a male. Batman goes back and forth with a girl multiple times about marriage and stuff like that. Though not inappropriate, it should be monitored by parents. We see some male mini-figures (especially Batman) with shirtless torsos.

The spiritual content gets only four small mentions. We hear a vampire say Namaste. Unikitty replies, “Ooo, sounds spiritual.” The vampire agrees and the conversation ends. In another scene, we see a date that says, 60,000,000 BC. Another person looks like a devil. Rex also says that he has been meditating.

As for language, it is mostly mild. We hear 2 “h-ck” and 1 “h-ckish”. we also her one “g-shness” and one “O my g-sh.” One person is called a jerk and another is called another bad name. In the credits song we hear the word “d-ng.”

This movie is great for your family. I highly recommend it. It has a great family lesson and it also has a great story about being there for each other. While there is a little language, that is pretty much all that is bad with this movie,a and that is even mild. I hope you plan on watching The Lego Movie 2: The Second Part soon!