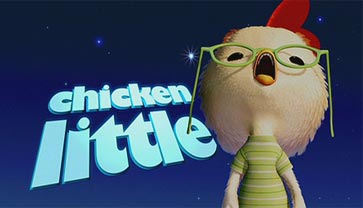 “The sky is falling!”

Chicken Little made a big mistake when he was a young chick. When he was younger, he had something hit him on the head. After being hit on the head, he began to tell everyone around him that the sky was falling. This put everyone into panic. Many buildings were damaged in the process, and when everyone realized that Chicken Little was wrong, they called him crazy. Since then, Chicken Little has been made fun of in many ways. But Chicken Little is fed up with living in the past. He is ready to live in the present and fix the mistake he made by doing something great so that his mistake is forgotten forever.

Chicken Little really feels bad for messing up, and now he wants to change what he did. He feels bad for his dad, especially. He feels that he is letting his dad down. He wants to impress his dad so that his dad can be proud of him.

Though Chicken Little’s motives are good, his dad in not perfect either. His dad constantly doesn’t listen to his son throughout the movie. This is true till the end, when they have a talk. Then in the last half an hour of the movie, his dad learns to trust Chicken Little.

In one scene, Chicken Little isn’t believed by anyone in his town, except his friends. Throughout the movie, Abbey, Runt, and Fish(out of water) stand up for him. They also help him in many other areas as well.

The only violent content in this movie includes a few people being vaporized. We also see a few guns pointed at people, but no one is shot. No one dies in this movie.

There is a little sexual content in this movie. We see Chicken Little in his underwear in three scenes, twice with other people here. In one of those scenes, he accidentally stumbles into a room with girls, he quickly runs out.

There is not a lot of language in this movie. Mostly you just here name-calling, making this movie extremely kid-friendly.

Chicken Little has some great lessons talking about the importance of family and friends. It also has a great plot that no one will see coming. It is definitely a great movie for your kids to see with very little problems to watch out for. I hope you decide to check out Chicken Little.