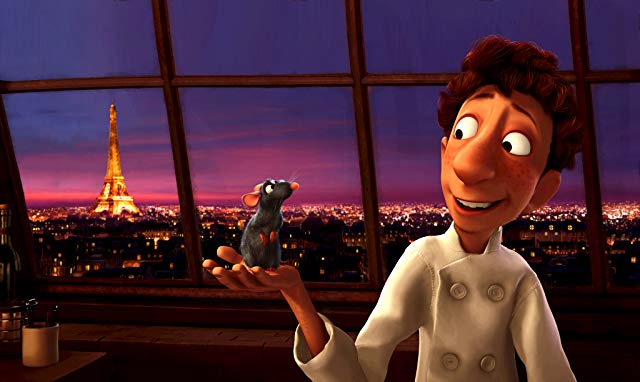 That is what some may say, but I think you can fix that statement by saying that every human can cook. But if I did that, then there would be no reason for this movie. In this movie, a rat names Remy believes that he can cook. When he actually ends up helping a young man, he finally gets his chance. The problem is, the man doesn’t know how to cook, so instead Remy helps him cook by using his hair to guide him into making delicious dishes that no one has ever tasted before. Can Remy and Linguini work together to make their restaurant again?

This movie has some good lessons. In the movie, we see that Remy wants to make things change. He doesn’t want to just be normal, he wants to explore. So instead he tries to learn to cook, even though his family is against it. One of the reasons he leaves the rat colony is because he believes stealing is wrong. I am glad to hear this being taught, because usually we see others stealing something and making a joke out of it. Sadly though, Remy is seen stealing once.

We also hear that someone believed in heaven and that “she is covered now.” Linguini seems to have a good attitude and he doesn’t want to kill anyone when he is told too. Remy’s family helps him when he needs them.

Remy has a ghost version of a chef come tell him what to do. This person gives good things to do and warns him to not steal. This is sort of a Holy Spirit kind of guy.

Remy disobeys his father, but then learns what his father warned him about. (but the father turns out to be wrong at the end.)

We see some wine on many occasions. Skinner tries to get Linguini to tell Skinner his secret by making him drunk. Linguini also lies to a few people but confesses at the end.

There is some language to consider in this movie. One rat says “shut up.” Another person say “welcome to h-ll” as Linguini enters the kitchen. After that, we hear a “my g-d.” That is as far as the language goes though.

Overall, I likes this movie. It made me laugh and it made me hungry. I highly recommend this movie for a family movie night. It has good lessons and shows great teamwork. I hope you consider to watch it, click on one of the links below to buy.
DVD: