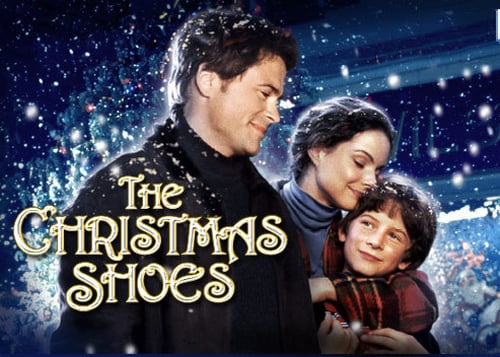 This movie is a great Christmas movie. It is good for the entire family though  it can get really sad at times. A few notes I would like to add are that there is two uses of “d-m- it” I and one us of “cr-p.” In this movie, I’m going to tell the plot, so expect a lot of spoilers.

The movie starts off with a man named Robert is going to decorate his mother’s gravestone. As he makes his way to her grave, he remembers something that happened 15 years ago that changed him. Immediately, we are brought back 15 years ago to show this to the viewers. Hence, the movie’s main plot begins. Robert is a busy lawyer that has barely anytime for anything but for work. His family is falling apart, but he is only considered about moving to a new house. As he is going to work one day he is getting in his car till he sees a pair of Christmas shoes that are left in the street. He picks them up, but he doesn’t take care of them. Instead he just sets them in his house.

Then for some background for the other family. The Andrews family has three members. Maggie and Jack and their son Nathan. Nathan really wants a puppy, but his father is against it. We then learn that Maggie is having heart problems. Both Maggie and Jack hope for a solution.

When the doctor gets reports back from the hospital, he goes and tells Maggie and Jack. The doctor has some bad news. Her heart is getting worse and if they don’t fix it soon, Maggie will die.

As soon as they find a donor, they will give her the heart, but her blood type is very hard to match. The family’s hopes are high.

At the same time, Robert and his family are having some difficulties of their own. Robert is beginning to be so caught up in work, that he is breaking promises and being mean to everyone.

A Heart is Found

The doctors have actually found a heart for Maggie. When they get Maggie to Boston, they begin to operate. But then, there is a problem. The heart has a disease in it, so it won’t work. Now Maggie only has weeks, if not days left to live.

As Christmas nears, Maggie is left out of her volunteer position at the school. Now, Robert’s wife steps in to help with the children’s choir, which Maggie was directing. Robert gets angry at his wife for doing that and losing her a chance to get a job he set up for her so they could pay for a new house.

Finally, Robert takes care of the shoes. It took a lot of will, but he finally did.

At the same time, Nathan knows that his mom is going to die, so he wants to get her one last present. He quickly tries to gather some money. With the help of his teacher, they collect a lot of cans. Nathan goes to get the pair of Christmas shoes that Robert dropped off. When he gets to the checkout, he bumps in front of Robert and pays for the shoes, only to be $5 dollars short. Upset, he begins to leave. Robert asks what is wrong, and Nathan explains the problem. Robert, touched by the boy’s passion, helps him pay for it. Robert’s life is forever changed. Robert heads to find his wife to explain what just happened to him. Nathan runs home to be with his mother.

When he finally gets there, he puts on his mother’s shoes. She loves them, but is really weak. As she breathes her last breaths, The children choir sings outside “Silent Night.” In the choir, Robert asks for forgiveness and tells his wife that she can teach and that he doesn’t care about a new house. Then Maggie dies.

At the end, Nathan actually gets a puppy for Christmas and Robert begins to love and care for his family and keep his promises.

Then we go back to the graveyard. Robert gets ready to leave when he meets a teen who is leaning over a grave and leving a pair of shoes there. he tells Robert “Merry Christmas” and then says he has to go hit the books. he says he is studying in the medical field. As he leaves, Robert looks at the shoes and the grave stone to find that it is Maggie’s stone and that was Nathan. Before Robert can reveal his identity, Nathan is already driving away.