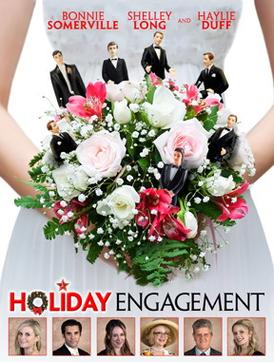 In classic Hallmark style comes this 2011 movie originally entitled “A Thanksgiving Engagement” but renamed so that it could be shown during the Christmas season. It follows a typical Romantic Comedy plot with a setup, things are going well, the twist and then the happy ending. 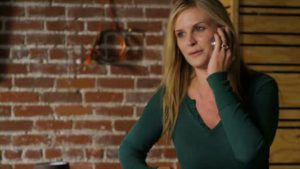 The year is 2011, in the middle of the recession/recovery after the 2008 collapse, so there’s some appeal to people losing their jobs.

Meet Hillary Burns. She’s a journalist specializing in the downtrodden at a low budget paper that’s doing an article on some homeless people and bumps into a man dressed as a nokia telephone twirling a sign. It seems pretty obvious that this guy will play a part later based on how big a part he is given now. Anyway, Hillary gets a call that tells her that the paper she works for is closing, and to make matters worse, her fiancee is getting a big promotion in Pittsburgh. Only problem, she lives in California and doesn’t want to move.

This causes the groom-to-be to realize that this might not work out after all and he calls of the engagement (they had been dating for 7 months, engaged for 2). This sets up the problem– Hillary has told her mother that she will be able to meet Jason (the fiancee) at Thanksgiving, and now she’s no longer engaged. Her friend, Sophie, convinces her to take a video of herself asking for someone to pretend to be Jason and go with her, in exchange for some tickets she just won on a radio program. 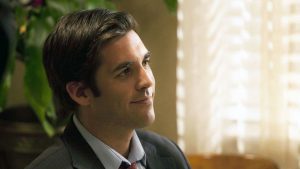 After a cute montage of attempts at a video as well as some responses, she gets a connection with (surprise, surprise) the Nokia phone guy. He agrees to pretend to be Jason– after all, he’s an actor– in exchange for the tickets. They meet up at a coffee shop, that he’s working behind the counter, and she gives him instructions. They drive away in her car, that she has trouble getting started.

Here’s where it seems to get a little weird.

She had him like her on Facebook, and then go through her photos looking at family members trying to get their names. Shouldn’t the family members have seen this addition, see that it was the wrong name, etc? How about after they met him.

And why did she have the memorize the names of her family? They had never met before (this was to be their first meeting). Did Jason get a similar drill? Given the fact that Jason was pretty much married to his job, I doubt it.

And then, when they get there, why isn’t Hillary wearing the engagement ring? I mean, Jason is supposed to remember all the names, but she can’t remember to wear the ring? The single thing the mother will want to show off other than the guy?

In any event, David is good at deflecting and blending in. He stops her dad from getting legal counsel from him, he covers for the missing ring– probably going too far– and genuinely seems to be getting along with everyone. He also has a nice save when he’s outed in the taco place. But his heart is actually for another girl which is part of…

Although the running themes throughout David and Hillary’s relationship has been that David is pining for this girl that treats him as a “get back” guy and Hillary believes that Jason will never come back to her, Jason does make an appearance. This causes everyone to find out the secret and David to depart– though not until after he confronts the mother about how Hillary is doing everything to make her happy and she should read Hillary’s articles and ask what makes her happy. 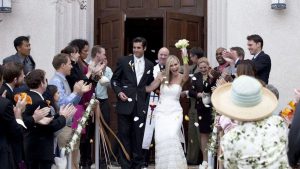 This, in time with Jason behaving the worst he has ever behaved (nothing like a guy that would be trying to win back his fiancee!) leads Hillary to decide to live a life of crime and steal Jason’s Tesla to chase down David and tell him that she loves him and that she wants to marry him– even though he’s said that he wouldn’t convert to Roman Catholicism and she’s going to be doing time for Grand Theft Auto.

They end up driving away in her car with their dog Whiskey.

As a typical Hallmark movie, we’re watching more for the experience than the plot. There are a few really good sequences (making the video, watching the replies, teaching the old girlfriend a lesson) that are lots of fun. And then there are parts where you just scratch your head– like a Jewish man who doesn’t do Christianity knowing how to play from memory a Christmas song like Angels We Have Heard on High and sing it, in parts. I mean, I know that you can hear this song all the time so maybe even a Jewish person could sing it– and it is Hillary’s favorite song, even though she didn’t tell him that– but still.

It does have a few interesting insights– like when Trish explains to Hillary that she needs to make sure to stay persistent in getting a man and what it means to her and her family, which curiously has Hillary marry the unemployed actor instead of the accomplished lawyer. In any case, don’t take it too much as prescriptive as much as just fun like it’s supposed to be. I mean, no one should lie to their family about who they are supposed to marry!