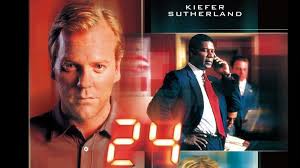 Jack Bauer is an agent at CTU (Counter Terrorist Unit). Jack’s job is to protect politicians from terrorist threats. In this season of 24, Jack is assigned with protecting a black senator named David Palmer from a terrorist threat. The senator is supposed to be at a presidential primary that day. CTU has reason to believe David Palmer will be assassinated there. The only man standing between the terrorists and Palmer is Jack Bauer. Jack would easily be able to do his job, if the terrorists hadn’t also captured his family. It’s up to Jack to save his family, and protect Palmer.

The events in the episodes happen in real time, making this the longest day for Jack’s life. It starts at midnight and ends at midnight the next day.

Jack Bauer wants to protect his family, and is willing to do anything to do so, however, he also wants to fulfill his mission. Though we see Jack break a lot of rules, he generally stays true to protecting Palmer.

David Palmer is a man of high honor. He does what he knows is right, despite the consequences. When a case comes up that he didn’t know about, his family wants him to hide it, but he refuses. Throughout the television show we see him doing the right thing. Palmer is generally called the “good guy” of the TV Show.

If you don’t like blood, I do not suggest this TV show. In almost every episode, we see some blood, sometimes more than usual. Many people are shot with guns, some more than once. We see one person die in each episode. Many explosions are also seen. A couple are choked and others dies some other cruel deaths, such as stabbings. The violence alone is enough to get this movie a PG-13 rating.

Palmer’s daughter was caught in a rape. We hear this a lot throughout the TV show. We also see one couple having sex in the background of one scene early in the show. One other instance of this happens early in the TV show. One other woman gets raped (off-screen, but implied). We see one sex scene later in the TV show, and this one is intense enough to skip, with a guy and girl with basically no clothes on. We also see a lot of kissing in this show, but in one episode, we see to girls kissing each other rapidly. We also hear of one woman expecting. One couple talks of getting divorced.

Kimberly is seen wearing some in immodest clothing in some episodes. Other woman wear some revealing outfits. One woman’s bra is seen. A couple guys are seen shirtless.

We see some people drink beer and other alcohol. In one episode someone is in a bar. One lady is caught smoking an illegal substance by a cop. Not much drinking is seen throughout the TV show.

We hear some language in all the episodes. I will mention words we hear. We hear some “sh–“, “d-m-“, as well as some “s-n -f a b-t–h.” The Lord’s name, as well as Jesus’ are misused as well. Other name-calls are used. No f words are heard in this TV show.

Jack Bauer definitely wants to protect his family and fulfill his mission, but things can get intense. The constant cliffhangers at the end of each episode are begging you to want to watch another. However they are fun and full of action, you need to be careful who you let watch this season, because their is some intense scenes in this movie. Other than that, enjoy all the twists and cliffhangers in Season 1 of 24. Let us know what you thought of the season, but no spoilers please!