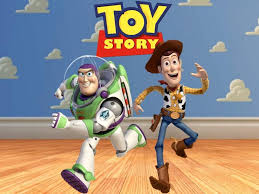 Toy Story has had 2 sequels and also has another movie in progress at the moment. Woody and Buzz Lightyear are at the top of their game, and while we get ready for Toy Story 4, I thought I would write a review about the first Toy Story and how all these toys came to be family.

The movie starts out with Woody. Woody is a cowboy toy and is Andy’s favorite toy. They do everything together. Woody enjoys his life with Andy, but one day that all changes…
Andy’s birthday is something all the toys are afraid of. They are afraid that they will be replaced. Woody tells everyone not to worry,  but it doesn’t help. As Andy opens his presents, the toys wait anxiously.  All the things he get are nothing to worry about except an action figure named Buzz Lightyear. Buzz is the coolest and newest toy. All of the toys like him immediately,  but Woody gets jealous. Woody’s jealousy gets Buzz and him stuck away from home,  and they have to get back fast before Andy’s parents sell their house. Can Woody and Buzz work together?

Woody gets jealous and does some things that are wrong, but he learns that what he did was wrong,  he wants to apologize for what he did. The toys, eventually, forgive him. Woody and Buzz also learn the importance of friendship. They both are seen sacrificing their lives for each other. Near the end, they have the perfect version of a friendship.
Being a G-rated movie, there is very few problems. There is no sexual content except for a couple kisses off-screen.

The violence in this movie is not a big problem. One toy is blown up off-screen. Also another couple toys lose arms and legs, but they eventually get them back. No blood is shown in the entire movie.
As I said, there is no sexual content that deserves mentioning.
In one scene, a toy drinks a lot of tea and begins to act drunk. Another toy quickly wakes him up, and he stops and comments, “I think I had to much tea.”
The language in this movie is mild. We hear “stupid” and “idiot” a couple times. Other name calls are used once in a while. We hear one toy say, “son of a building block.

Overall, this movie is very kid-friendly. It is a great movie for your entire family and I highly recommend it. I hope you will check it out. Leave us a comment about your opinion of the movie.  Will Buzz and Woody make it back to Andy before it is too late?