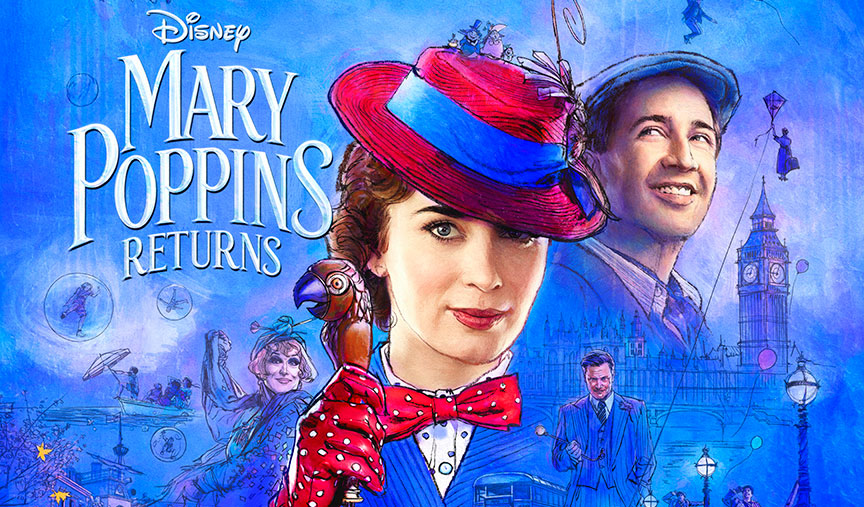 “Why as I live and breathe, it’s Mary Poppins!”

Mary Poppins was a great movie back in the late 20th century. At the end, Bert (played by Dick Van Dyke) asked Mary Poppins to not stay away long. Fortunately, 55 years later Mary Poppins returns. Not only has time gone forward in real life, but also in the movie. The kids in the first movie are now grown-ups.

Now, the Banks have a situation. Mr. Banks took out a large loan that he is trying to pay off, and after losing his wife, he forgot to pay. Now he has to pay the full loan, or his house gets repossessed. In the meantime, Mary Poppins teaches the new Banks children some interesting lessons.

Mr. Banks is very stressed in this movie about losing his wife and possibly his house. However, he tries to maintain a calm attitude, he doesn’t yell at his children much, but when he does, he quickly apologizes. The Banks family grow closer together in this movie more than they ever had been.

Mary Poppins teaches the kids lessons that they need. Also, Mary Poppins, despite being criticized, continues to fulfill her mission. There are also some songs in this movie that you may find catchy, like in the first one.

In my opinion, this movie should be rated G. There is no drug content or violent content (except for a wagon chase).

Jack and Miss Banks are falling in love in this movie, and a person peeks in on them and sees them talking, and says, “I’m watching that handsome man talk to Miss Banks.” We also hear in a song that a woman only wears a hat, but then Jack quickly puts in, “And a leaf!”

There is two uses of “good heavens” and one use of “pea brain.”

As I said before, this movie deserves a G rating. I think that it is suitable for all ages. It follows right after the first Mary Poppins, and I think fans who liked the first will love the second. I love the lessons that Banks family go through. So, if you are looking for a movie for your family tonight, I highly recommend this one. Will the Banks be able to keep their house?